The puppies turned four months old on Dec. 26. I was on my way down to a USDAA trial in Glen Carbon, IL (outside of St. Louis). I was very excited to make the trip since I knew beforehand that Terry and Carol Smorch were going to be there with my baby Sirrah :) Also, Grandma Linda was going be there as well so would get to meet Fever for the first time. I was glad she could meet her while she's still a little one. I asked Linda which parent she thought Fever looked like and she thought Ransom. Some days, I do think she looks like her daddy but as Linda said, she sees Ransom in her eyes. I see her as well. Now, onto Sirrah. I was so happy to see her. She was CRAZY to see me. I was so happy she remembered me. She was so excited, she peed on me :) I didn't care one bit. I'd let her pee on me every time :)) I did get some pictures. The girls got along GREAT and played a lot over the two days. They did look alike :) A couple stats. Fever, on the day she turned 4 months old was a little over 17" and around 22 lbs. Shock, at that age was an inch small and a pound or two lighter. It looked like Sirrah was a little taller/longer, but not much. They were pretty close in size. Rogue is a bit smaller, maybe an inch and not sure where the boys are although I would guess Reece is around the same size as the B/W girls and I KNOW Great is big :) 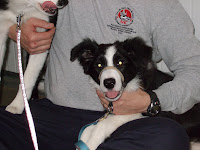 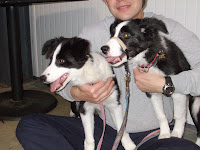 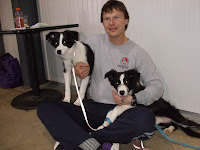 Here are a couple more pictures of Fever and Fev and sister Shock! 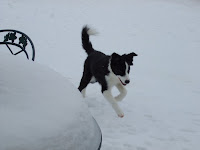 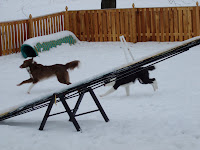 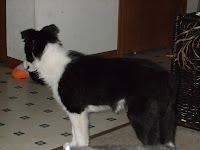 Well, four of the five pups were able to get together over Thanksgiving weekend. I got a few shots and some video that is on my you tube account along with some video of their momma playing with Fever. http://www.youtube.com/watch?v=KbcokCsCKOY Here are the pictures although they turned out pretty dark. Also a couple of pictures of Fever from today. BTW, I was able to measure three of the pups yesterday. Fever (was Polaris) was the tallest at 15 3/4", Great (was Vega) measured at 15 1/2" and Reece (was Atlas) measured at 15" even. I suspect Rogue is not far behind at about 14 1/2" or maybe even a little taller. 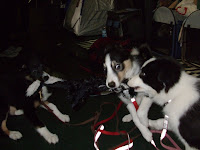 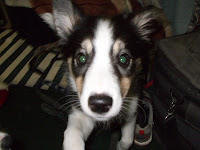 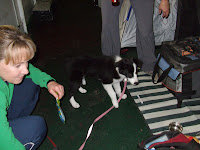 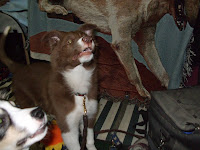 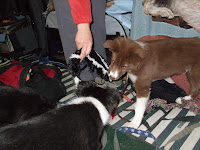 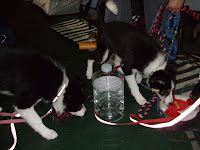 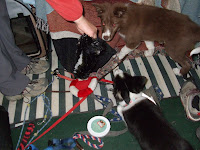 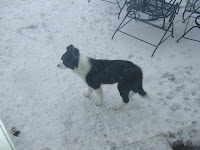 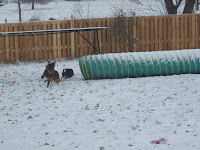 Posted by skluever at 2:45 PM No comments:

Posted by skluever at 2:24 PM No comments:

The puppies turned nine weeks old on Tuesday. I am having a BALL with little Fever. She's a nice outgoing puppy and always up for a good time :) She does get a little devilish on occassion, mainly when she gets over tired. She knows down and sit and will even stay for a short time. She's learned to walk well on a leash too. I think it's inherited from her momma's Heelalong lines :) They seem to just do it. Here are some pictures taken last Tuesday evening (the day she turned 9 weeks old). Thanks so much to Whitney Rupp for taking these beautiful shots :)

Also, here's one of Sirrah that Terry sent. 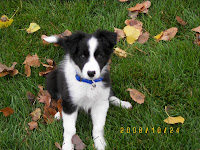 Well, to make a long story very short, Kelly Garver is now the proud owner of baby Sol. I realized that keeping two pups wasn't fair to anyone, me, them or my other dogs. So, Kelly (who wanted a pup all along but couldn't convince her husband), was able to work it all out. So, I brought little Sol to her house on Thursday. I'm SOOO glad to have her so close to home, I can't tell you. I am very lucky to have all the wonderful homes I have for our babies. I will continue to update the blog with pictures when I can. Until then, all the babies and Mom are doing great!
Posted by skluever at 10:21 AM 5 comments:

Well, it's been so much quieter. I smartly scheduled private lessons all day yesterday so I wouldn't be home thinking about missing my puppies. I have SO much to do this week, I won't have time to think about it. I've received updates from everyone and everyone is doing great. Atlas is now Ransom's Brightest Star "Reece" is his call name. Mary is tossing around a few different names and is taking her time to find the right one. She had one picked out but isn't sure it suits him. For now, he's "Pup, Pup, Puppy!". I'm not sure about Sirrah. They were considering keeping the name. Whatever they decide is fine with me. Polaris is now Ransom's Temperature Rising, call name "Fever" and Sol is Sol :) Ransom's Heart and Sol. So far, everyone seems very happy with their new babies. It's so nice to get the updates. I can't tell you how much it helps :) I took some video last night of the girls playing in the yard and a small clip a little while ago of Shock with her baby sisters. Shock is really very good with them. She would LOVE to have them out of the pen, chasing her around. Unfortunately, she's a "little" rough so I'm not going to let it happen until they are a bigger. She plays with Frisco all the time and honestly, I don't know how he stays sound! He is a crafty, tough, quick little guy. Thank goodness or he'd be dead!

Well, everyone started arriving at around 11 am to pick their puppies. Terry and Carol Smorch from Minnesota arrived first and spent a lot of time with the puppies. Then Denise and Terry Elger from Milwaukee came next, then Mary Klein from Columbus, Oh. We had a really nice time playing with and watching the puppies play. Terry and Carol actually arrived early so got quite a bit of time to play with each pup individually. I've decided to keep Polaris and Sol for now. Polaris simply because she IS her momma (and that's why I did this breeding) and Sol, because she is special, has been from the day she was born. If I decide that I'm crazy for keeping two, I have a good friend who may be able to take her down the line. We'll see. For now, they are both staying. It's better for me emotionally to have two left. It was so hard to let the others go. I honestly have been having such a hard time dealing with it since it hit me hard on Thursday that this was all coming to an end. Now that everyone has left, I feel so much better. Just seeing how much everyone liked their puppies helped so much. I think everyone got the puppies they were hoping for. I was most worried about Sirrah since she's pretty attached to me. As I already mentioned, Terry got to play with each one. Atlas had a ball, then Vega was a little out of it (honestly, not his normal self AT ALL) and the Sirrah. I got smart and went in the house when Terry played with Sirrah and watched from the kitchen. I was amazed at how she took to him. She can be a little shy but was chasing, tugging and kissing him. I agonized over letting her go. Not anymore. Terry chose Sirrah. I think it's going to be a great match. She really loved him. I've never really seen her take to anyone like that. I'm at peace with it all now. Then Denise got to choose. She took the pup I thought would fit her too! She chose Atlas. He's simply stunning and looked even MORE stunning in her arms :) Then Mary got the red boy she's been wanting all along. She just had an attachment to him. I can't believe it all worked out, but it did. I'm so incredibly happy about how it all went today. I think I may even be able to sleep tonight :) I will miss them terribly but I remind myself that they won't be little puppies for long. Here are pictures of everyone with their new babies :) 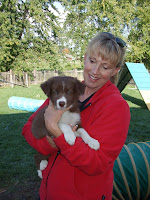 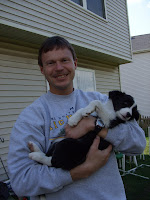 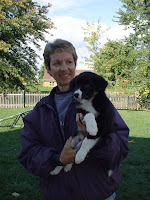